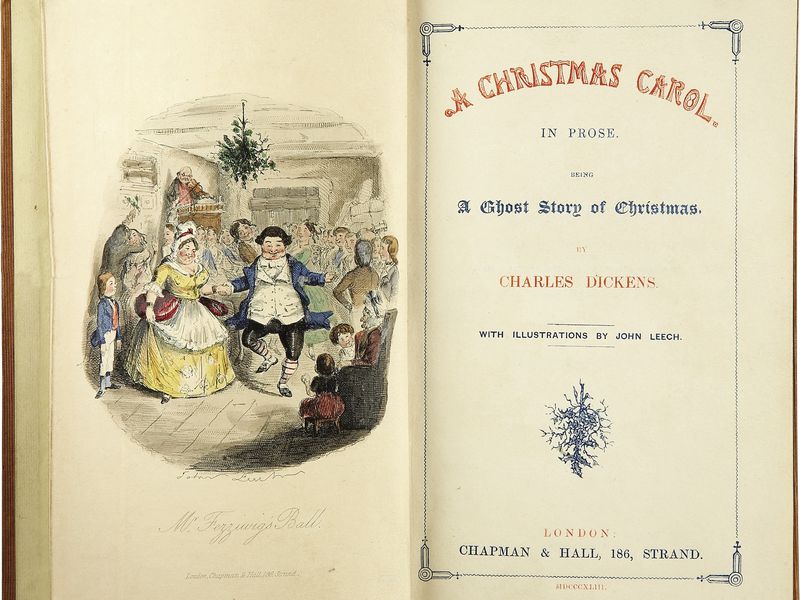 When Andy Williams penned his famous Christmas song “The Most Wonderful Time of the Year,” he included the following line in his lyrics: “There’ll be scary ghost stories, and tales of the glories of Christmases long, long ago.” Sounds more Halloweenish than Christmasy doesn’t it? It turns out, telling scary ghost stories at Christmastime has a long history. The most famous Christmas ghost story is, of course, Charles Dickens’ A Christmas Carol. Although most people perceive it as a tale of redemption and a celebration of the Christmas spirit, at its heart, it’s a ghost story. In fact, the title page of the first edition stated, “A Christmas Carol in Prose being A Ghost Story of Christmas.”

Kat Eschner (@KatEschner) writes, “The tradition of holiday ghost stories goes much, much farther back — farther, perhaps, than Christmas itself. When the night grows long and the year is growing to a close, it’s only natural that people feel an instinct to gather together. At the edge of the year, it also makes sense to think about people and places that are no longer with us. Thus, the Christmas ghost story.”[1] Honestly, when I think of ghost stories, fond reminisces of grandma and grandpa aren’t what come to mind. Ghost stories are about getting a tingling feeling throughout your body and having the hair on your arms stand tall as tales of specters fill your thoughts and dreams. Eschner admits, “[Ghost stories] have little to do with the kind of commercial Christmas we’ve celebrated since the Victorian age. They’re about darker, older, more fundamental things: winter, death, rebirth, and the rapt connection between a teller and his or her audience.” So how did ghost stories, as Eschner writes, get “packaged in the cozy trappings of the holiday”? How did they become part of the most wonderful time of the year?

Justin McDaniel, a professor and chair of religious studies at the University of Pennsylvania, traces the art of the Christmas ghost story to pagan practices. “In Victorian England,” he writes, “it was a common practice for families to tell ghost stories at Christmas time. Of course, Christmas, as celebrated in Europe and the U.S., was originally connected to the ‘pagan’ Winter Solstice celebration and the festival known as Yule. The darkest day of the year was seen by many as a time when the dead would have particularly good access to the living. In all cultures, there have been both protective and menacing ghosts.”[2] In Dicken’s A Christmas Carol, spirits appear to be both menacing and protective. They threaten Scrooge with a dire future unless he changes; but, their ultimate goal was to affect the kind of change that would ultimately prove good for him and society. McDaniel notes, Christmas ghost stories are only one part of pagan traditions adopted into the Christmas narrative. Other aspects include “the Christmas tree, Yule logs, and the figures of Santa Claus and elves.”

Colin Fleming argues alcohol may also play a role in why ghost stories accompany a festive holiday like Christmas. He explains, “The Fezziwig side of Christmas … makes you look up the word wassail when you encounter it and think, Ah, that would be fun. But what of the darker elements of Christmas — and what of Christmas for those people who enjoy making merry most years but may have hit upon a bit of a tricky patch? What succor of the season might they find at the proverbial inn? Having experienced both sides of Christmas, there is but one constant I am aware of that serves you well both in the merriest of times and in the darkest: the classic English Christmas ghost story. … Time was the English loved to scare you out of your mind come December, but in a fun way that resulted in stories well afield of your typical ghost story outing.”[3] Back to the wassail. Fleming notes, “The first key to a Christmas ghost story is a convivial atmosphere.” Nothing, adds more to a convivial atmosphere than getting sloshed. Fleming explains, “People didn’t have TVs: people drank, people got to telling tales, someone told a tale and someone tried to tell a bigger one, and then, lo, we got a whole ghost story Christmas tradition.”

By the time Dickens wrote A Christmas Carol in 1843, things had become bleak in England. The Christmas spirit was waning. Eschner explains, there were “extremes of wealth and poverty, industry and inability.”[4] In fact, Dickens felt himself on the edge of poverty and needed some quick cash. A good ghost story seemed like a good way to highlight the conditions of the poor and to line his own pockets. Through sales of the book, Dickens hoped to clear a thousand pounds to get himself out of debt. Although the book sold well, he only cleared £726. Disappointed, he wrote the following to his literary advisor, John Forster: “I had set my heart and soul upon a Thousand, clear. What a wonderful thing it is, that such a great success should occasion me such intolerable anxiety and disappointment! … I am not afraid, if I reduce my expenses; but if I do not, I shall be ruined past all mortal hope of redemption.”[5] Despite his personal disappoint, Eschner notes, “The book did have the cultural impact Dickens was hoping for.”

Eschner concludes, “As Dickens wrote, the ghosts of Christmas are really the past, present and future, swirling around us in the dead of the year. They’re a reminder that we’re all haunted, all the time, by good ghosts and bad, and that they all have something to tell us.” So on this Christmas Eve, Fleming recommends you “ladle out some perry or mead — or just grab a Bud Light” — and thrill the family with a good, old-fashioned Christmas ghost story.