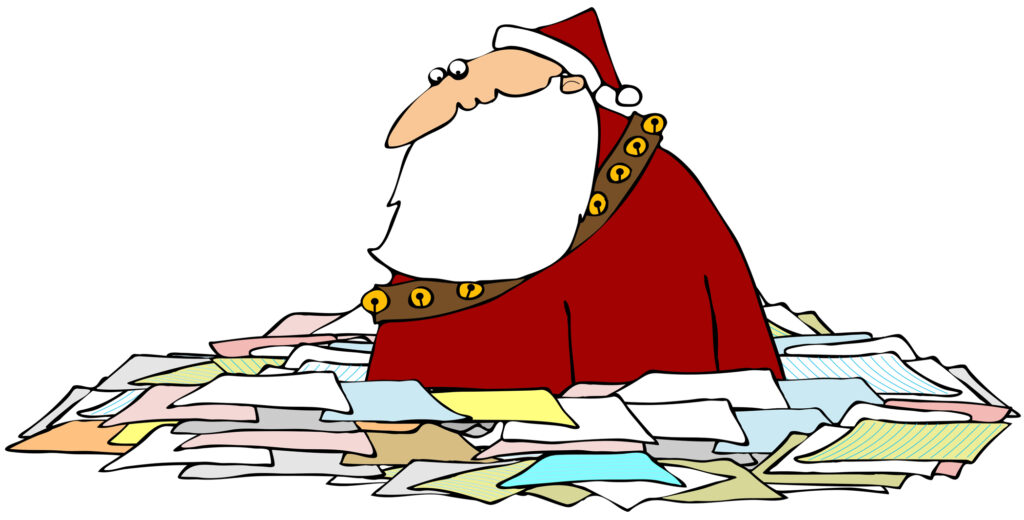 Today, a communication (aka letter) sent through the traditional mail system is often referred to as “snail mail” in order to differentiate it from email. There was a time, when the mail service was a primary link between friends and family. Since the Christmas season is often centered on friends and family, it’s no surprise that the mail service eventually came to play an important role in holiday celebrations. Specifically, I’m thinking about the enduring traditions of writing letters to Santa Claus and sending out Christmas cards to family and friends. Both traditions trace their origins to the Victorian Era.

A Brief History of Letters to and from Santa

Alex Palmer (@theAlexPalmer) reports Santa started writing to children before they started writing to him.[1] He offers a couple of examples of such letters. “The minister Theodore Ledyard Cuyler recalled receiving ‘an autograph letter from Santa Claus, full of good counsels’ during his childhood in 1820s western New York. In the 1850s, Fanny Longfellow (wife of the poet Henry Wadsworth) wrote her three children letters each Christmas that commented on their behavior over the previous year and how they could improve it. ‘You have picked up some naughty words which I hope you will throw away as you would sour or bitter fruit,’ Santa explained in an 1853 letter. ‘Try to stop to think before you use any, and remember if no one else hears you God is always near.'” Palmer indicates children probably weren’t surprised to receive letters of counsel from Santa because, during that time in history, Santa Claus was often portrayed as a disciplinarian.

Although most historians trace the tradition of children writing letters to Santa to the mid- to late-1800s, the website PackageFrom Santa, states, “After much research there really is little information as to how the tradition of writing Santa a letter started, but what was found was one single reference to a letter written from a little girl in the 1200’s to the real St. Nicholas. In the letter she wrote ‘St. Nicholas patron of good children, I kneel for you to intercede. Hear my voice through the clouds And this night give me some toys. I want most of all a playhouse with some flowers and little birds.'” Palmer notes the Civil War had a tremendous impact on how consumers viewed the mail service. Because so many letters were exchanged during the war, the postal service grew and the price of postage dropped. As a result, Palmer states, “Children began to view the postman as an actual conduit to the Christmas figure.”

Surely, the most famous letter ever written to (or about) the jolly old elf was written in 1897 by an eight-year-old girl named Virginia O’Hanlon. Well, she didn’t actually write to Santa, she wrote to the editor-in-chief of The New York Sun. The letter stated:

Dear Editor, I am 8 years old.
Some of my little friends say there is no Santa Claus.
Papa says, “If you see it in The Sun, it’s so.”
Please tell me the truth, is there a Santa Claus?
Virginia O’Hanlon
115 W. 95th St.

Palmer reports it was not unusual for children to try and reach Santa through the newspaper. He explains, “Newspapers across the country were reporting the arrival of Santa letters to local postal departments, and then to their own offices (recognizing the emotional power of the letters, many papers published the children’s scrawls and even offered prizes for the ‘best’ letters). ‘The little folks are getting interested about Christmas,’ wrote a reporter for Columbia, South Carolina’s Daily Phoenix in December 1873. A correspondent for the Stark County Democrat, in Canton, Ohio, noted the following year: ‘One day last week two bright little children entered the Democrat office and wanted us to print letters to Santa Claus, from them.'” Nowadays there a lots of ways for children to reach out to Santa, but there is something romantic about sending him a hand-written, snail mail letter. And you don’t have to worry about Santa getting those letters. In 1989, he was assigned his own Zip Code.

A Brief History of Christmas Cards

According to Mandy Barrow, “The first Christmas card was created and sent in 1843. A man named John Calcott Horsley printed the first Christmas card for Sir Henry Cole, the friend who had given him the idea. Sir Henry Cole, a wealthy British businessman, wanted a card he could proudly send to friends and professional acquaintances to wish them a ‘Merry Christmas.’ The card depicted a typical English family enjoying the holiday, and people performing acts of charity. An important part of Victorian Christmas spirit. A thousand copies of the card were printed and sold for one shilling. This is reportedly the first Christmas card to be produced and sold to the public.”[2] John Hanc notes, “Unlike many holiday traditions — can anyone really say who sent the first Christmas fruitcake? — we have a generally agreed upon name and date for the beginning of this one.”[3] Some of those original Christmas cards still exist. In 2010, one of them was auctioned by Sotheby’s and sold for $7000. As the infographic below notes, the most expensive example of that card sold for $35,800. Victoriana Magazine notes:

“The Christmas card publishing industry created unheard of opportunities for artists, writers, printers, and engravers. In 1880 the Christmas card had a new birth, for it was then that a great London firm offered five hundred guineas in prizes for the most artistic designs. Many of the great artists of the day responded with their best ideas. Kate Greenaway, Walter Crane, and Thomas Crane were among the many 19th century artists famous for their greeting card designs. In addition, literary writers saw the opportunity; they gave to the beauty of the painting the music of their words. Many well-known writers were not above this profitable work of creating greeting cards. Thousands of pounds were spent in finding the right poems and suitable Christmas sentiments, until at last these Yuletide offerings reached the climax of their literary and artistic excellence.”

The following infographic created by printing company moo.com contains a lot of other information about the Christmas card tradition (click to enlarge). Much of the United States is predicted to be cold this Christmas, so an old Christmas toast seems appropriate: “Here’s to the day of good will, cold weather, and warm hearts!” As you celebrate this holiday season, please accept warmest wishes from all of us at Enterra Solutions®. 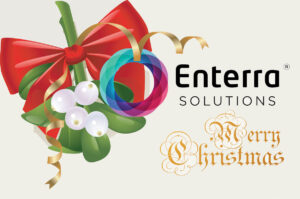