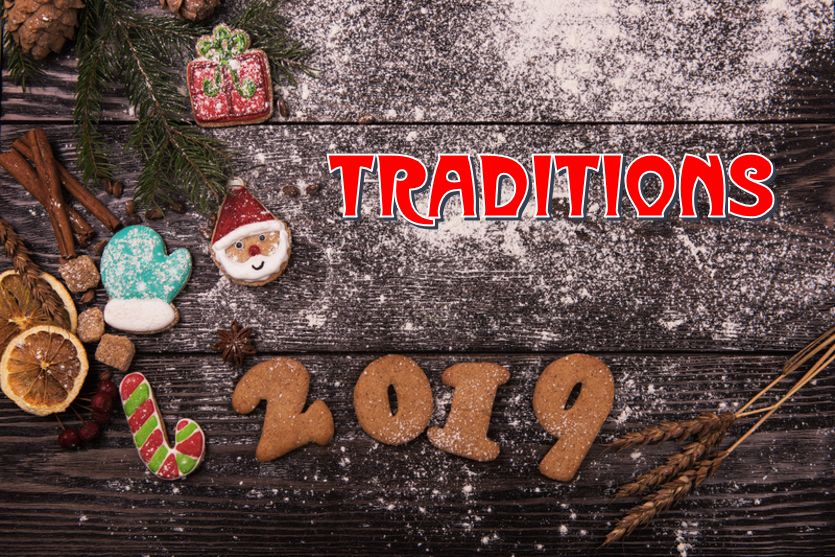 “Across the world,” write the folks from Balsam Hill, “Christmas is celebrated in a multitude of rich and cherished traditions. Their origins are wonderfully varied, emerging out of cultures and beliefs throughout history.” To make their point, they posted the following infographic (click to enlarge).

The infographic beautifully depicts the fact that Christmas traditions vary widely across the globe. It also makes clear that formal Christmas celebrations didn’t appear until centuries after the birth of the baby the holiday honors. Perhaps the oldest tradition associated with the Christmas season is gift giving.

The editorial staff at The Week writes, “Christians see gift giving as a symbolic homage to the Three Wise Men’s tributes to the baby Jesus. In the New Testament, the Magi are described as honoring the newborn Savior with valuable gifts of gold, frankincense, and myrrh.”[1] The staff at The Economist adds, “Of all the actors in the Nativity story, the three wise men are by far the most fun.”[2] The article goes on to note that given a choice between being shepherds, angels, innkeepers, and other various characters, children most often opt to be one of the Wise Men in school or church plays. The biblical script is not clear about whether the Wise Men actually showed up on the night of Jesus’ birth or found him living as a small child in Egypt (after all, following their visit to Herod, the King had male children two-years-old and younger slaughtered). Regardless, The Economist staff notes that not having them show up for the Christmas nativity story wouldn’t be much fun.

A late addition to the story of the Magi is an old, Russian women named Babushka. The folks at whychristmas.com explain, “To people in western Europe and the USA, one of the most famous things about Christmas in Russia is the story of Babushka. Babushka means Grandmother in Russian. It tells the story of an old women who met the Wise Men on their way to see Jesus.” They go on to explain Babushka hosted the Wise Men but didn’t understand what all the fuss was about and failed to go with the Magi when they left her home. She eventually regretted her decision and followed in their footsteps, but by the time she reached Bethlehem, Mary and Joseph had fled to Egypt with the baby Jesus. According to the story, “Babushka was very sad that she had missed Jesus and it is said that Babushka is still looking for him.” There’s only one problem with the story being a Russian Christmas tradition. The website explains, “Most people in Russia have NEVER heard of the story as it was probably created by an American poet and writer called Edith Matilda Thomas in 1907!” I guess you could call it fake news!

Following the tradition of gift giving by the three Magi is the story of Saint Nicholas and the personas his story inspired. Brian Handwerk observes, “The modern American Santa was born in the Mediterranean, evolved across northern Europe, and finally assumed his now-familiar form on the shores of the New World.”[3] The St. Nicholas Center explains:

“The true story of Santa Claus begins with Nicholas, who was born during the third century in the village of Patara. At the time the area was Greek and is now on the southern coast of Turkey. His wealthy parents, who raised him to be a devout Christian, died in an epidemic while Nicholas was still young. Obeying Jesus’ words to ‘sell what you own and give the money to the poor,’ Nicholas used his whole inheritance to assist the needy, the sick, and the suffering. … One story tells of a poor man with three daughters. In those days a young woman’s father had to offer prospective husbands something of value — a dowry. … This poor man’s daughters, without dowries, were therefore destined to be sold into slavery. Mysteriously, on three different occasions, a bag of gold appeared in their home-providing the needed dowries. The bags of gold, tossed through an open window, are said to have landed in stockings or shoes left before the fire to dry. This led to the custom of children hanging stockings or putting out shoes, eagerly awaiting gifts from Saint Nicholas. Sometimes the story is told with gold balls instead of bags of gold. That is why three gold balls, sometimes represented as oranges, are one of the symbols for St. Nicholas. And so St. Nicholas is a gift-giver.”[4]

The Balsam Hill infographic notes the first nativity scene was set up by Saint Francis in 1223. Nearly 600 years later the first Christmas tree would be erected in the United States. Decorations and other Christmas traditions really took off in the Victorian era, with both Charles Dickens’ “A Christmas Carol” and Christmas cards being introduced in 1843. In 1872 Wilhelm Friedrich Füchtner started painting nutcrackers and two decades later Marius Petipa and Lev Ivanov choreographed the Nutcracker ballet to a musical score by Pyotr Ilyich Tchaikovsky. Christmas decorations really took off following the introduction of electric Christmas lights in 1882 and Christmas celebrations would never be the same. Emma Bedford reports, “Americans planned to spend 61 U.S. dollars on average on decorations for the holiday season in 2019. This is an increase of over 20 dollars compared to ten years previously, when consumers spent around 41 U.S. dollars.”[5]

Winston Churchill once stated, “Christmas is a season not only of rejoicing but of reflection.” Reflecting on Christmas traditions and how they have affected our lives is part of the season. Charles Dickens wrote, “Happy, happy Christmas, that can win us back to the delusions of our childhood days, recall to the old man the pleasures of his youth, and transport the traveler back to his own fireside and quiet home!” Traditions can do that. From all of us at Enterra Solutions®, have a merry and safe Christmas day.