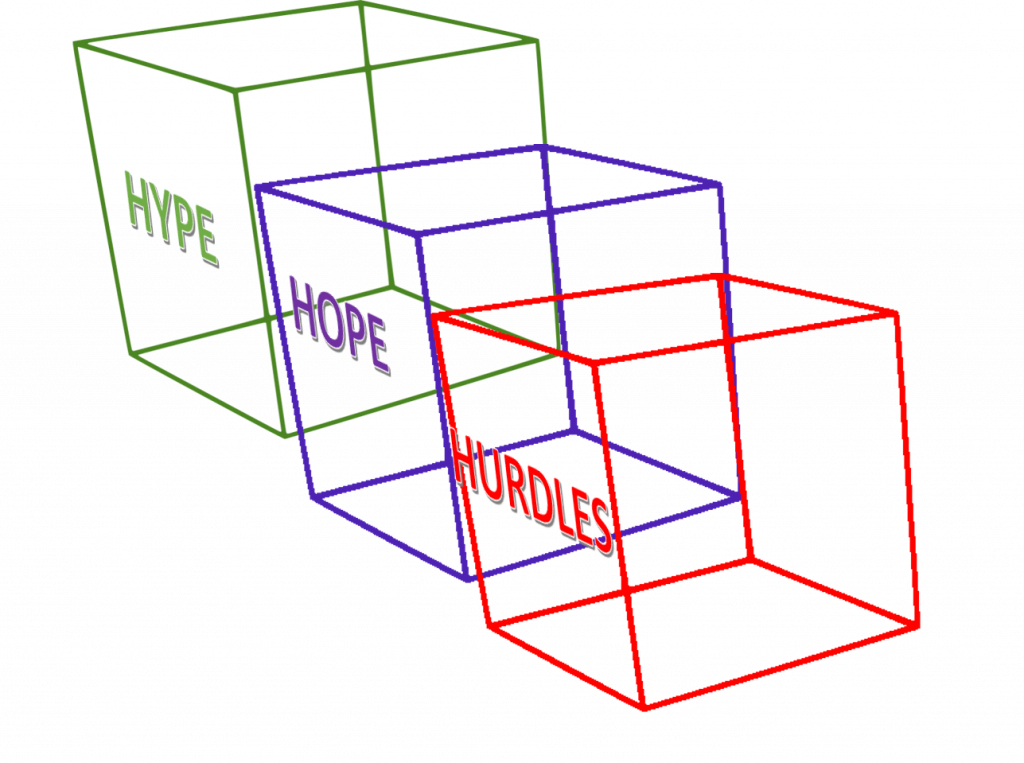 “Supply chain management is currently undergoing a transformational moment,” writes. Gerald Fenech (@gerald2273). “Past antiquated systems are proving to be unsuccessful in navigating the complexity and immediacy of the modern supply chain, and new models are emerging that promise to improve these systems. In particular, blockchain, a prolific technology that began as the underpinning for digital currencies, is proving useful in this regard.”[1] In Part 1 of this article, I focused on blockchain technology’s hype and hope in supply chain operations. I also pointed out that blockchain remains in its early development days and, like all new technologies, it suffers from growing pains. Mark van Rijmenam (@VanRijmenam), founder of Datafloq, explains, “Blockchain is still a new technology [and] how organizations adopt this technology also depends on how existing and related challenges are resolved.”[2]

Van Rijmenam discusses many of the hurdles facing widespread use of blockchain (see below); however, the elephant in the room according to Alisa DiCaprio (@AlisaDiCap) and Jacqueline Yang, researchers at R3, is governance. They explain, “Today, traditional digital platform companies are governed like most firms and institutions — one entity is in charge. It’s responsible for maintaining its platform, attracting users and fixing problems when things go wrong. This is a standard setup found anywhere from the biggest tech companies to a small-town grocer. Blockchain is different, working through a mechanism known as shared consensus. In simple terms, this means that rather than having one entity in charge — like a company or board — all platform participants can propose and effect change. Information is broadcast network-wide, and anyone can access and verify it in real time without any need for third-party confirmation. It dramatically decreases transaction times, lowers transaction costs and has been described as a revolutionizing force for industry. But as amazing as all of that sounds, the reality of blockchain — particularly for business — isn’t so simple. One problem, for example, is governance.”[3]

Hurdles to be overcome

One of the interesting issues raised by DiCaprio and Yang goes to the heart of how blockchains operate. In order for the system to work, everyone connected to the system must abide by identical protocols. It makes sense, therefore, for some organization or consortium emerge to ensure a set of standards is adopted. As sensible as this may be, DiCaprio and Yang explain this could lead to problems. They explain, “Unfortunately, consortia can also raise antitrust concerns. Especially in the maritime space — which includes cargo shipping and transport logistics — consortia have faced grilling by lawmakers to ensure that they don’t take up too much market share. This is due to the concentrated nature of the industry, where, as an example, 65% of the containerized shipping market is covered by just five players. The worries are valid — too much concentrated power can yield results like the manipulation of technical standards and use of blockchain as a vehicle for collusion. On the other hand, if success in an industry hinges on a single platform controlled by a limited number of players, then gatekeeping could become an issue.” Van Rijmenam points out seven issues he believes are preventing blockchain technologies from moving forward. They are:

1. Scalability. “The first challenge is the technical scalability of blockchain, which is, at least for public blockchains, a hurdle that could limit their adoption. … Scalability is less of a problem for private blockchains, such as Hyperledger, since the nodes in the network have a direct interest in processing transactions; this means the computational power required to validate blocks is less of an issue. If transactions cannot be verified in real-time or within a short time frame, this affects the technical adoption of a blockchain, as rapid decisions are often required, especially in today’s high-velocity environments.”

2. Transaction speed. “The second challenge is related to the transaction speed of a blockchain. … At the 2018 Singles’ day in China, Alibaba processed 325,000 transactions per second (resulting in a revenue of $30.8 billion in 24 hours). Blockchain will take time to reach these levels. Meanwhile, new distributed ledger technologies are being developed that offer thousands or even millions of transactions each second. However, the deployment of these new distributed ledger technologies in enterprise environments is still limited.”

3. Decentralization. “Although this does not apply to all distributed ledger technologies, it is important to emphasize. … Decentralization is tackled differently when it comes to private blockchains. Since everyone is known in the network, it does not matter if only a dozen nodes control the network. … Only fully decentralized blockchains are tamper- and censorship-resistant and so far, there are only limited examples of truly decentralized blockchains.”

4. Lack of Talent. “The fourth challenge, from an organization design perspective, is the lack of talent to build decentralized applications. Educating employees to work with blockchain takes time; however, it is not yet taught at many educational institutions. Only 50% of the world’s top universities offer a blockchain course. As is the case with all new technologies, organizations and academia need to work together to ensure the correct curriculum is introduced.”

5. The Ecosystem. “The fifth challenge is that a decentralized ecosystem surrounding blockchain and supporting distributed products and services is needed. This includes decentralized cloud storage (currently being developed by companies such as Ethereum and the InterPlanetary File System), decentralized archiving, decentralized communication and decentralized domain name servers.”

7. Resilience, irreversibility, quantum computing and lack of standards. “There are also challenges related to data on a blockchain. Resilience and irreversibility are two key attributes of blockchains; once data or transactions are appended and accepted by a network, they can no longer be changed. However, only authenticity can be ensured through a blockchain, not reliability and accuracy. If bad data are offered correctly, they will end up on a blockchain; likewise, if a document contains false information but is offered right, it will end up on a blockchain. Theoretically, data on a blockchain will be there indefinitely, but the development of quantum computing means the cryptography used today might not be secure in the (near) future.”

Van Rijmenam adds, “Blockchain is a promising technology. Blockchain, particularly when used in concert with other technologies, offers organizations an opportunity to re-think their internal and external processes, remove inefficiencies, improve transparency and provenance and build a better organization overall. However, it faces numerous challenges that could affect its adoption across organizations.”

The ShipChain staff observes, “Although the benefits that blockchain will bring to the industry are staggering, it should not be thought of as a ‘fix all’ when it comes to supply chain woes. Adding it to your operations will be significant — think increased visibility, traceability, productivity, and profitability — but blockchain on its own cannot guarantee the accuracy of your data. People and trust are still necessary components regardless of whether or not blockchain is in the mix. Blockchain can hold the appropriate person or persons accountable due to its track and trace feature, but it cannot prevent legitimate users from entering inaccurate data into the system. Ultimately, companies can implement blockchain into their systems today, but it is crucial that they continue to ensure their partners, suppliers, and users are trustworthy and understand the importance of data integrity.” Most supply chain professionals see the benefits mature blockchain technologies can bring to supply chain operations. They are also learning about the hurdles that must be overcome before those technologies become mainstream. Regulators, providers, and users have a lot to think about over the next few years.