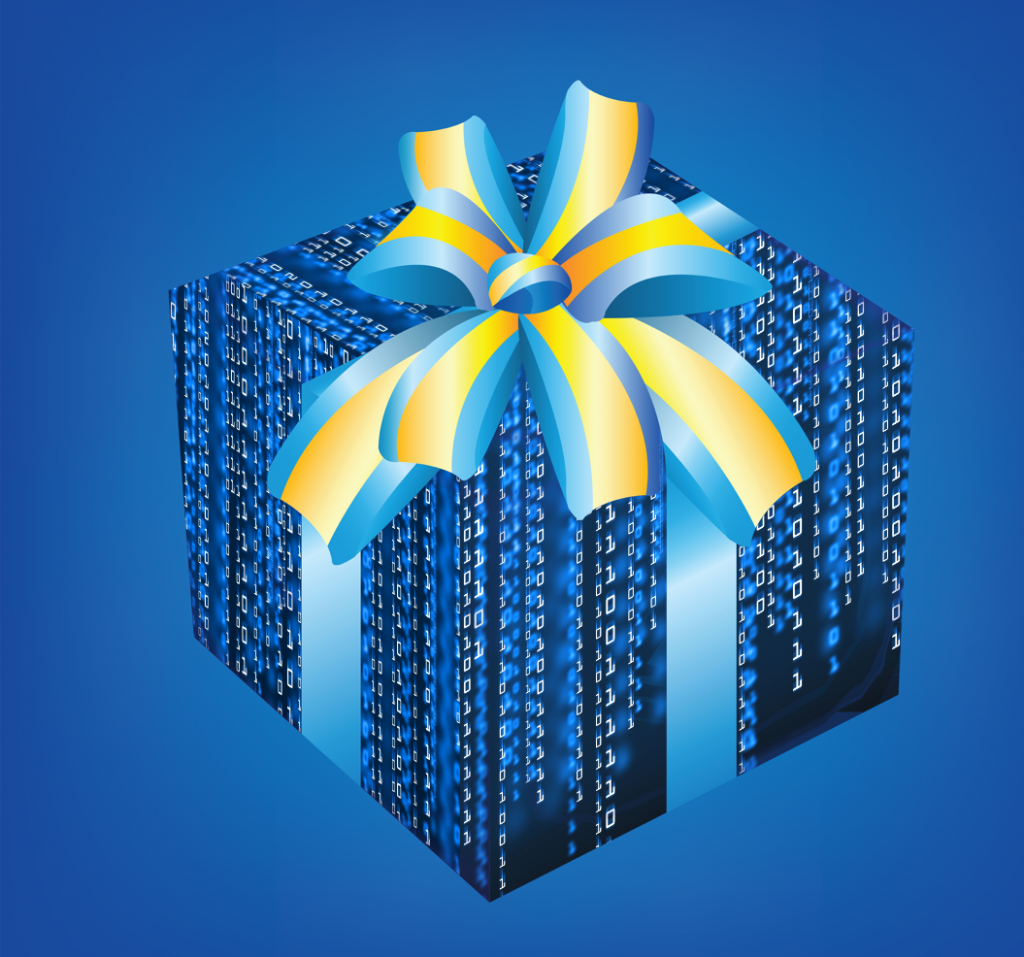 Big Data: The Gift that Keeps on Giving

Big data seems like old news; but, it becomes more important every second of every day as humongous amounts of data are generated. Gillian Tett (@gilliantett) notes the word “data” comes “from the Latin verb ‘to give’, presented in the neuter past participle, which could be translated as ‘that which is given’ — or even ‘a gift’.”[1] She believes the etymology of the word is entirely appropriate. She explains, “What drives our modern cyber economy is not just bytes and numbers but … a massive system of exchanges. Silicon Valley is partly based on oft-ignored barter trades of personal information for services between internet users and tech companies.” She cites, Kadija Ferryman, a researcher at New York’s Data & Society research institute, who observed in a 2017 speech, “When we think about data this way, as a gift, we can understand the social dynamics at play in today’s data collection projects.” Considering what big data can do for businesses, data is indeed a gift that keeps on giving.

As Tett points out, however, data is about exchanges between people and companies. The data that Sheffi views as a company’s most important asset also represents, in many instances, interchanges with people. Journalists from the Economist assert, “It is tangible human beings, not abstract ‘data’, that power the online economy.”[4] In other words, a company’s most valuable asset may be consumers. They add, “That data are valuable is increasingly well-understood by individuals, too, not least because personal information is so often hacked, leaked or stolen. … The first step towards ensuring the fairness of the new information age is to understand that it is not data that are valuable. It is you.” The point here is that data is valuable, but so are people. If companies want to continue gleaning value from data they need to be responsible to the people from whom the data is collected. That exchange is a social contract that is becoming more recognized and more regulated as we head deeper into the Information Age.

Companies don’t collect data as a hobby. They mine data as an asset. The value of data comes from its analysis. Sheffi notes companies like Amazon, Facebook, Verizon, and leading financial institutions “are collecting data on customers on an unprecedented scale. When combined with advances in artificial intelligence and machine learning, and ever-expanding sensor networks, they will establish a grip on markets that will be extremely difficult to break.” But it’s not just these behemoths that profit from advanced analytics. Sheffi notes, “Companies that are able to create granular, accurate demand forecasts that can be modified on the fly in response to unexpected demand shifts, and closely tie these to manufacturing and delivery operations, can avoid … missteps and stay ahead of the competition.” Business executives recognize advanced analytics are no longer a nice-to-have capability but a must-have one. As a result, Kayla Matthews (@KaylaEMatthews) reports, “The big data analytics industry will reach a global market worth of $40.6 billion by 2023, according to information from ResearchandMarkets.com. It shows a combined annual growth rate (CAGR) of 29.7 percent from 2017 until then.”[5]

Another reason cognitive technologies with embedded analytics will become essential is because data sets have become so immense. Mark Samuels (@mark_samuels) notes, “Companies are drowning in data. Researcher IDC predicts that the global datasphere — the summation of information created, captured, or replicated — will grow from 33 Zettabytes (ZB) in 2018 to 175 ZB by 2025. Enterprises are increasingly responsible for the bulk of this data collection. IDC says 60% of all data will be created in the enterprise by 2025, up from 30% in 2015. To make the most of the information they collect, organizations must create a strategic response.”[6] Part of that strategic response is selecting the right advanced analytics package. More often than not, advanced analytics will be provided by cognitive computing platforms. Amit Apte, global director of digital integration at Mars, explained to Samuels that the business value of data comes from gaining actionable insights. He told him, “We’re focused on analytics, big data and business intelligence. We’ve started a movement where my peers in data and analytics are building platforms to look at data and to create knowledge that we didn’t have before.”

As Sheffi notes, some of that new knowledge involves up-to-date consumer preferences and behavior. Marketing consultant Stephen Diorio (@Dioriostephen) explains, “Many leading marketers are finding a new paradigm for ingesting, consolidating, analyzing and sharing customer data in a complex data environment. Specifically, they are using new Customer Data Platforms (CDPs), artificial intelligence, and machine learning to make it much easier to aggregate data from customers around an identifiable customer profile and build better models that explain customer behavior and track the impact of a wider variety of marketing inputs and actions.”[7] Matthews adds, “Most enterprises know data analytics is instrumental in helping them make business decisions, and that realization is also spurring the market growth for the technology. According to information from SAS, 72 percent of respondents said analytics give them valuable insights, and 60 percent cited data analytics as something that helped their organizations innovate.”

The business world is in a bit of turmoil at the moment trying to figure out how to maintain a fair and equitable exchange of goods and services for consumer data. Facebook’s Mark Zuckerberg asserts it will take years to work things out. Consumers and governments might not be that patient. The sooner an acceptable scheme can be developed for handling data the better. Businesses need data and consumers benefit when that data allows companies to serve them better. Done correctly, it’s an exchange of gifts. Tett concludes, “Executives in Silicon Valley would do well to consider this point, and so should the rest of us — in a much wider sense.”