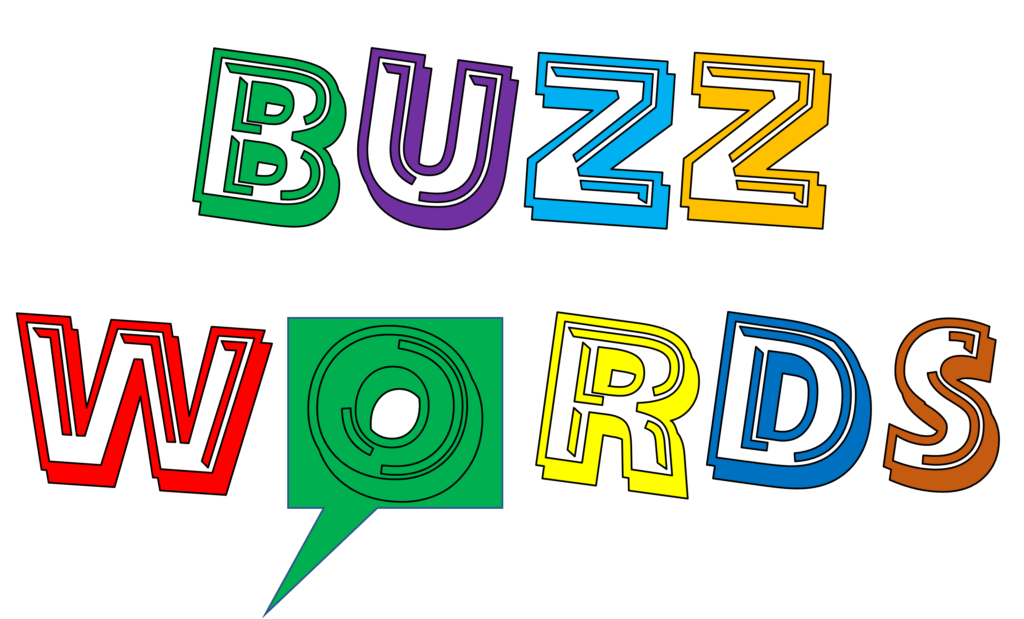 According to the dictionary, a buzzword is “a word or phrase, often an item of jargon, that is fashionable at a particular time or in a particular context.” Unfortunately, buzzwords generally get a bad rap. The Wall Street Journal staff writes, “Some are just hackneyed. Others signal something, but mean nothing specific. Others nod to a shiny virtual future, which they may or may not deliver. Some are just irritating.”[1] I’m not quite as jaded about buzzwords as most people. They serve a purpose. Like metaphors, buzzwords are often used as shorthand for ideas that are basically understood by participants and, in the moment, don’t require fuller elaboration to get across a point. Without buzzwords, many conversations and articles would be exhausting. A Wall Street investment banker, who writes using the pseudonym The Epicurean Dealmaker, explains, “Idioms evolve organically among the members of a group sharing common interests and concerns to better communicate those very interests and concerns. This can take the form of abbreviation, where a commonly understood word or phrase can convey an entire sentence or conversation.”[2] Hence, I’m an anti-Brutus. I’m here to praise buzzwords, not to bury them.

Business journalist Saige Driver (@SaigeDriver) writes, “Some buzzwords are acceptable, industry-appropriate and sometimes the most effective way to get a point across.”[3] Chris Chancey, founder of Amplio Recruiting, told Driver, “The use of buzzwords is acceptable to the extent that it is context-appropriate and the person you are communicating with can easily understand what you are saying.” Nevertheless, most people, like Merlin Crossley (@MerlinCrossley), Deputy Vice-Chancellor Academic at the University of New South Wales, fall into the camp of buzzword haters. He writes, “Buzzwords fall into three categories.”[4] He explains:

“The first [category] includes cliches that operate as a sort of shorthand for common but complex ideas. These words do hold meaning but through overuse have lost much of their impact. This makes them extremely useful. They can be used for hypnotizing an audience and disarming it. Listeners set aside skepticism as they succumb to liquid words, which no longer have any edges or weight, flowing gently over them.” … The second class of buzzwords are those that have lost all meaning and serve as useful intensifiers; for example, the word strategic. It used to mean a long-term plan. These days it’s used more as a verb to replace mundane and boring words such as big. If you try omitting the word strategic you often find nothing really changes. Strategic planning is the same as planning and strategic choices are the same as choices. Strategic decision-making is just decision-making. … The third class of buzzwords are euphemisms. These are often maligned but in fairness they are essential for anyone engaged in human interactions. After all, one doesn’t want to startle the horses. … [For example,] environmental services has replaced the more distasteful garbage collection.”

People who complain about the use of buzzwords probably wouldn’t be any happier having to listen to a long, detailed explanation every time a “buzzword” topic is discussed. I agree that an inappropriate use of a buzzword is a lose-lose situation; however, used appropriately buzzwords have their place. For the naysayers, below you will find some of the buzzwords about which people are complaining.

John Ferguson, a Research Associate at TrustRadius, put together a lengthy list of buzzwords he believes represent “the most egregious professional faux pas of 2021.”[5] I have highlighted some of the buzzwords on his list. As you read the words, ask yourself, “What term would I use instead?” If you can’t readily think of one, then you’ll appreciate why buzzwords (or buzz phrases) can be beneficial.

1. New Normal. Occasionally, the world experiences, to use a buzz phrase, a paradigm shift. The shift creates new circumstances that are often labeled the new normal. Ferguson writes, “Close your eyes and imagine the most common phrase you heard in 2020. The odds are good that ‘new normal’ would top that list! It’s the number one most annoying business buzzword of 2021.”

2. Synergy. Ferguson indicates that synergy was most annoying business buzzword in 2020 and still ranked high in 2021. The editorial team at Indeed writes, “‘Synergy’ is the way that different components work together to complete a goal. A team that gets along well and produces high-quality content can be described as having synergy.”[6] Nevertheless, Ferguson writes, “‘Synergy’ once had a contextual meaning about businesses working together. But the word has been so recklessly bandied about that you need a hasty Google search to understand it.” Really?

3. Pivot. Many companies reported they had to pivot their business in response to the pandemic — that is, they had to change what they were doing or how they did it. Ferguson writes, “Since virtually everyone needed to deviate from the plan for the year, ‘pivoting’ became an all-too-familiar phrase. … My advice: rather than using ‘pivot,’ leaders should just walk through what the pivot actually entails!”

4. Agile. Pivoting was closely related to another term that made Ferguson’s list — “agile.” Carman Wenkoff (@Cwenkoff), Chief information officer at Dollar General Corp., agrees with Ferguson that the term ‘agile’ is annoying. He told the Wall Street Journal, “[Agile has] too many meanings, and it’s seen as the hammer that can solve everything.” Ferguson notes, “‘Agile’ is a work methodology that emphasizes adaptability and continual reevaluation. This contrasts with the traditional waterfall approach, which prioritizes maintaining a consistent vision. … That’s not how ‘agile’ is used in everyday jargon. You’ve probably heard someone use the word ‘agile’ to imply some vague amount of flexibility or adaptability. There’s precious little substance behind what people think it means to be ‘agile’ in this context.”

5. Alignment. Ferguson notes, “‘Alignment’ runs into many of the same problems as ‘synergy.’ On one hand, it can have real value as a concept. As organizations grow, questions of ‘alignment’ are increasingly important to ask. But ‘alignment’ has taken on so many contextual meanings that the term means very little.”

6. Digital Transformation. As I’ve repeatedly pointed out in discussions of digital transformation, there is no one clear definition of what it means. Each company’s digital journey is unique. Brian Rice, CIO at Cardinal Health, told the Wall Street Journal, “We’ve struggled with that one ourselves, like, what does ‘digital’ mean? What does ‘transformation’ mean? What does ‘digital transformation’ mean? So I think trying to find a better way to describe that would benefit us all.” Ferguson adds, “Digital transformation should mean something very specific. But that meaning differs from how the term is often used. Broadly speaking, digital transformation means using digital-first technologies to make your business better. However, digital transformation is often used as code for ‘buying another product to replace a manual process.'” Tricia Wang (@triciawang), a self-described Tech Ethnographer & Sociologist, explains, “A lot of companies treat digital as if they are ‘doing digital’ — this is ‘digitization’ at its worst — as if it’s some checklist of things to do. It’s very transactional, and people are so busy doing digital they don’t even know WHY they are doing it in the first place! Whereas [some companies] embrace ‘being digital’ — this is ‘digital transformation’ at its best — it’s a total paradigm shift in the culture and operations — it’s not just about buying the latest digital tool, but about creating a new system, new cadence, new mindset.”[7]

7. Artificial Intelligence. As I have explained time and again, artificial intelligence (AI) is an umbrella term that covers a number of technologies — the most significant of which is machine learning. Like it or not, the use of AI is not going away. Dave Williams, chief information and digital officer at Merck & Co. Inc., told the Wall Street Journal, “[AI will] provide tremendous value over the next several decades, [despite the word itself being] just so overhyped and overused.” Eric Siegel (@predictanalytic), a former computer science professor at Columbia University, wishes people would more frequently use the term “machine learning.” He explains, “Machine learning is genuinely powerful and everyone oughta be excited about it.”[8]

Obviously, those aren’t all the buzzwords that raise peoples’ hackles; however, they demonstrate that, when used correctly, they do represent powerful and important concepts. Used incorrectly, they become a snake oil sales pitch.

You may have your own list of buzzwords that bug you. But many people agree with me that buzzwords can be useful. The editorial team at Indeed explains, “Much like other forms of slang, business buzzwords are important because they can simplify complex concepts into a word or phrase that is easy to understand. Buzzwords are used frequently in office environments and can be a key part of the corporate culture. Being able to correctly use buzzwords can help you engage with coworkers and customers according to the norms and expectations of your organization. Buzzwords can also increase employee engagement by using metaphors and interesting phrases to express daily tasks and goals.” Baylor Cherry (@BaylorACherry), inbound specialist for Bluleadz, concludes, “Buzzwords can either be cringe-worthy, overused, or irrelevant, or they can be valuable and have merit.”[9] That pretty well sums up the matter.