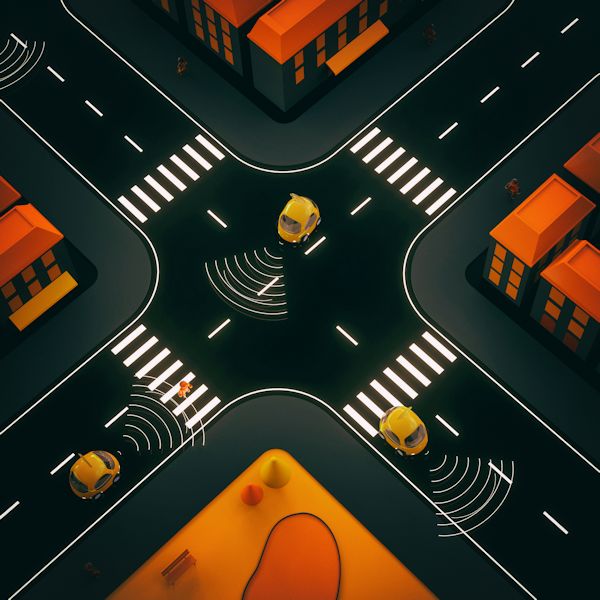 Autonomous Vehicles and the Future of Smart Cities

Traffic congestion is a problem in most metropolitan areas and city planners are wrestling with how to deal with it. Many of them look longingly to the day when autonomous vehicles take to the streets reducing accidents, improving traffic flow, and, if the vehicles are electric, eliminating choking pollution as well. Jaclyn Trop (@jaclyntrop) writes, “Driverless cars promise to reshape cities beyond just easing traffic congestion. These futuristic vehicles generate vast amounts of data that officials hope to use to fill potholes more quickly, replace parking lots with parks, and create traffic lanes for buses and first responders.”[1] To achieve some of these benefits, how consumers use transportation (especially cars) will have to change dramatically. More on that subject later. Transportation consultant and journalist Samuel I. Schwartz (@GridlockSam) asserts, “Autonomous vehicles, or AVs, will be the most disruptive technology to hit society worldwide since the advent of the motorcar.”[2] As we all know, “disruptive” doesn’t always mean “better.”

As noted above, one of the most anticipated advantages of autonomous vehicles roaming city streets is safety. AVs won’t eliminate accidents, but planners believe they will greatly reduce them. Fewer accidents means fewer traffic jams and fewer responses by police and fire units. Many of the benefits city planners and environmentalists are counting on autonomous vehicles bringing to the city rely on consumers abandoning car ownership. Rachel Linnewiel (@RachelLinnewiel) explains, “As autonomous vehicles become a significant form of transportation in cities, they will likely replace taxis, personal vehicles, and potentially other transportation modes, such as buses. This will result in an overhaul of the parking industry.”[3]

Playing devil’s advocate, I’m skeptical autonomous vehicles “will likely” replace personal vehicles for commuters living in suburbs. If — and it’s a big if — consumers can be convinced to give up personal ownership, autonomous vehicles could profoundly affect urban landscapes. Linnewiel notes, “The United States has more than 500 million parking spaces, and with good reason  —  cars spend about 95% of their time parked.” If those cars could remain in use rather than sit in a parking space, significantly fewer parking spaces would be required. Additionally, more cars could be parked in garages when not in use because space wouldn’t be needed to open doors since the cars are driverless. According to Linnewiel, “City parking won’t go away entirely  —  instead, cities are likely to incorporate small parking pit stops to accommodate autonomous vehicles during off hours.” Trop reports, “The City of Los Angeles has already begun asking developers to consider creating parking structures that can be repurposed as housing and retail if and when demand for parking wanes.”

With a change in consumer ownership of vehicles, Linnewiel describes a few other benefits. She writes, “Faster travel speeds, an increased use of carpooling, and the optimization of road usage thanks to interconnected cars and dedicated lanes will help to reduce city traffic and decrease commute times. In addition to reduced commute times, travel time to-and-from the workplace will become more productive for workers, because autonomous vehicles will leave the passenger free to check email or prepare for their workday. With a shortened (and more productive) commute time, autonomous vehicles could help anyone who commutes to or in the city to enjoy a better quality of life, thanks to an increase in free time.” Trop adds, “In addition, there would be fewer cars on the road, which would make it easier for cities to designate certain streets for pedestrians and cyclists only. The end result would be more walkable districts along with more public spaces for festivals and farmers markets.” Not everyone, however, believes autonomous vehicles will be good for cities.

The downside of autonomous vehicles for smart cities

Raphaël Gindrat, CEO and Co-Founder of Bestmile, asks, “Could autonomous vehicles be worse for cities than autos have turned out to be?”[4] She cautiously answers, “Few appear to think so. But we have a long track record of failing to anticipate the downside of mobility revolutions.” So what could go wrong with widespread adoption of autonomous vehicles? The most likely downside would be an increase rather than a decrease in traffic. Gindrat reports, “A study by the World Economic Forum and the Boston Consulting Group looked at traffic in Boston and found that autonomous vehicles would increase traffic by about 5%, mostly from people using these vehicles in place of public transit.” Derek Thompson (@DKThomp) agrees autonomous vehicles have the potential to increase traffic because so many more people may see owning one is a convenience (e.g., the elderly, people who have lost their driving privileges, etc.). He writes, “Self-driving cars have the potential to improve existing transportation technology in unambiguous ways, to expand the suburbs, and to create new economic opportunity for a variety of industries, from hotels to restaurants. But they might also change the character of our cities for the worse and strangle roads with cars in a way that ruins the urban experience for millions of people.”[5] At a time when city planners and environmentalists are urging more people to utilize public transportation, the autonomous vehicle trend could result in fewer people doing so.

Fortunately, cities have time to plan for a future featuring autonomous vehicles. Why? According to automotive journalist Tom Krisher (@tkrisher), there are a number of challenges autonomous vehicles need to overcome before they can be safely deployed on a wide scale in city environments.[6] Those challenges include:

City planners have a lot to consider and plan for if they want autonomous vehicles to be a beneficial part of their smart city plans.