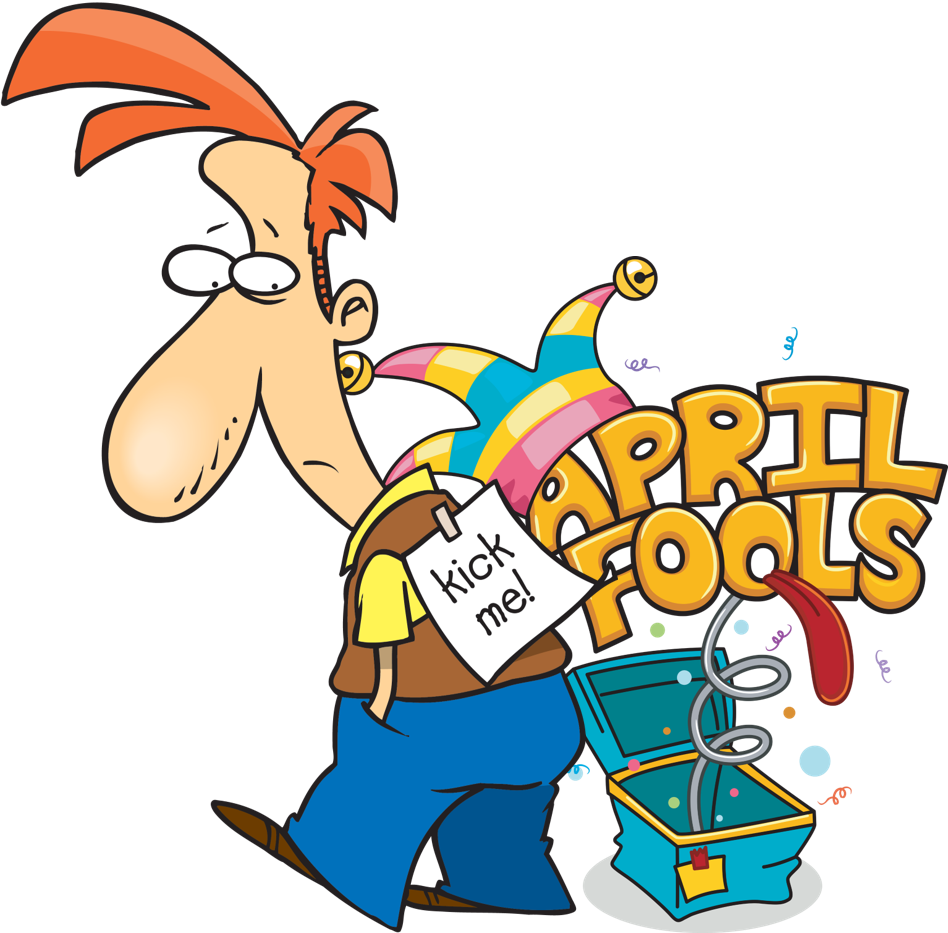 Today is the day set aside to send the gullible on “fools’ errands” to find things like a left-handed screwdriver, a board stretcher, a can of striped paint, a jar of elbow grease, or a length of rhumb line. Today, the uninformed adventurer might be sent out to capture a picture of some of the world’s rarest animals — like gowks, snipes, snarks or, even, bigfoot. It’s a day to send bored children on scavenger hunts for pigeon milk or frog whiskers. And it’s a day you had better fact-check anything you read, watch, or hear.

If you are wondering why April 1st is a day set aside for pranks, there are several competing stories from which you can choose. Journalist Ashley Ross writes, “One possible precedent is in the Greco-Roman festival called Hilaria, which was celebrated on March 25. The festival honored Cybele, an ancient Greek Mother of Gods, and its celebrations included parades, masquerades and jokes to celebrate the first day after the vernal equinox.”[1] If this is not the origin of April Fools’ Day, at least you know where the words hilarity and hilarious originated.

Another origin story harkens back to the Roman king Numa Pompilius. Amy Tikkanen, general corrections manager at Britannica, explains, “According to tradition, during his reign (c. 715–673 BCE) Numa revised the Roman republican calendar so that January replaced March as the first month. It was a fitting choice, since January was named after Janus, the Roman god of all beginnings; March celebrated Mars, the god of war. … In 46 BCE Julius Caesar introduced more changes, though the Julian calendar, as it became known, retained January 1 as the year’s opening date.”[2] With Numa’s revision, March no longer marked the beginning of the year — meaning anybody celebrating March as the first of the year were shamed as “fools” in April.

Other scholars insist the shift of the beginning of the year from March to January didn’t occur with the revised Roman calendar or the Julian calendar. Writer Matthew Wills explains, “For Europeans, April Fools hearkens back to the transition to the Gregorian calendar in the sixteenth century. The pre-Gregorian calendar had ended the year near the end of March, coinciding with the beginning of spring. With the new Gregorian calendar, the beginning of the year was moved to January. The calendar change was slow to take hold and there was resistance to it, but those who continued celebrating the new year at the beginning of April, old style, were ultimately shamed as ‘fools’.”[3] The editors at History.com embellish this latter tale and trace the origins of April Fools’ Day to France, where pranks were added to the celebrate the day. They write, “These pranks included having paper fish placed on their backs and being referred to as poisson d’avril (April fish), said to symbolize a young, ‘easily hooked’ fish and a gullible person.”[4] They go on to note, “April Fools’ Day spread throughout Britain during the 18th century. In Scotland, the tradition became a two-day event, starting with ‘hunting the gowk,’ in which people were sent on phony errands (gowk is a word for cuckoo bird, a symbol for fool) and followed by Tailie Day, which involved pranks played on people’s derrieres, such as pinning fake tails or ‘kick me’ signs on them.”

Ross indicates there is one other April Fools’ Day origin story. She writes, “Another origin story, which Simon J. Bronner, a professor of American Studies and Folklore at Penn State, says is very controversial, is rooted in Geoffrey Chaucer’s 1392 book The Canterbury Tales. ‘The controversy is over what Chaucer really wrote and whether there can be a direct link to April Fools’ Day,’ he explains. ‘The line in question is “32 March,” which was thought to be a joke because there is no March 32, but there are some medievalists who claim it was a misprint.’”

Companies are not above getting in on the prankster action. For example, in April Fools’ Day advertisements, Open Table once claimed it had created an app that let you taste a restaurant’s food by simply licking your phone. Liquor manufacturer Pimm’s claimed it had secured rights to advertise on the clock face commonly referred to as Big Ben. Other corporate pranks have included Burger King’s claim to have created both a left-handed Whopper and a chocolate Whopper; Taco Bell’s claim to have purchased the Liberty Bell; and Scope’s claim it had created a bacon-flavored mouthwash. The latest corporate gag was Volkswagen’s announcement it was changing its name to “Voltswagen” in the U.S.

The media is also willing to play the prankster game: PC Computing magazine published an article insisting Congress was considering legislation that made internet surfing while drunk a federal crime; the BBC once aired a 4-minute segment on how the Swiss were having a great harvest from their spaghetti trees; and, the fun-loving BBC also claimed to have perfected smell-o-vision and reported that Big Ben was going digital. Not all April Fools’ Day pranks go as expected. Journalist Lauren Cahn reports, “For April Fools’ Day in 1980, Boston TV news producer, Homer Cilley, (it actually rhymes with ‘silly’) produced a television broadcast about a hill in Milton, Massachusetts, that had begun oozing lava and spewing flames. He included fake warnings from then-president Jimmy Carter and real footage from Mt. St. Helens eruptions that implied the Massachusetts volcano had fully erupted. ‘April Fool’ read the card at the end of the segment, but hundreds of panicked citizens flooded law enforcement phone lines anyway. Cilley was promptly fired for failing to exercise ‘good news judgment’ and breaching FCC regulations.”[5] Seems harsh.

Journalist Brandon Specktor writes, “There’s no question that April Fools’ Day is one of the most widely recognized non-religious holidays in the Western world. Children prank parents, coworkers prank coworkers, and yes, national news outlets and fast-food restaurants still prank their readers.”[6] A word to the wise, if you plan on pranking someone, please keep in mind Wills’ advice, “If the victim isn’t laughing, too, then the April Foolishness has not worked.”