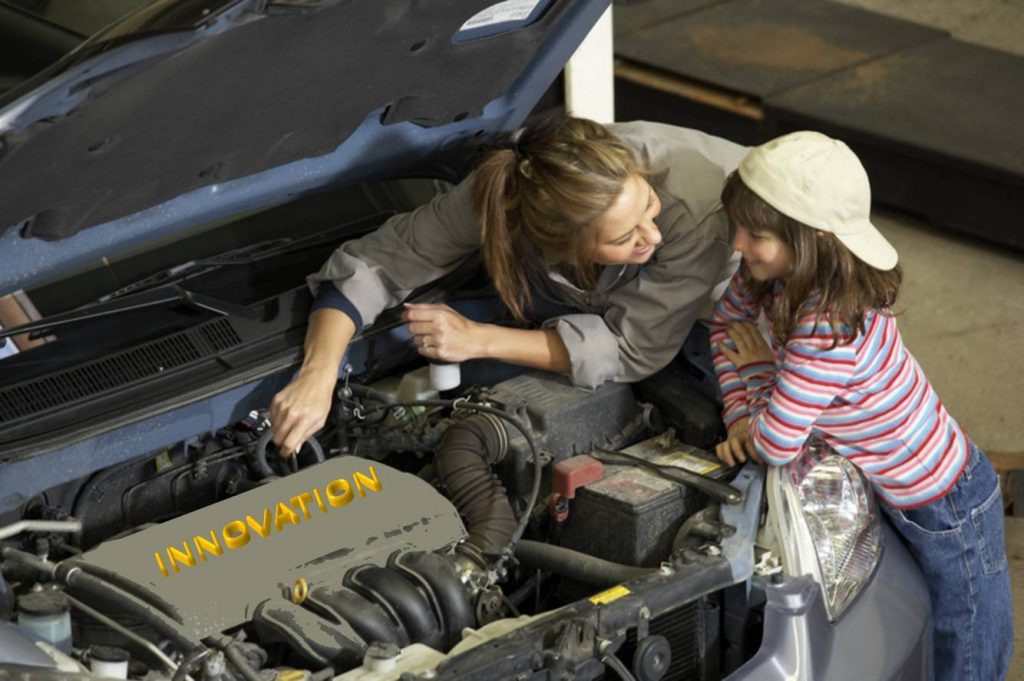 America Needs a Tune-up for Its Innovation Engine

For a century or more, the United States has been known as one of the most innovative countries on Earth. Mir Sadat (@Dr_Sadat_USN), a former National Security Council Policy Director, observes, “From health care to finance, education to navigating space, agriculture to climate research, and from Hollywood to the Pentagon, innovation has been America’s lifeblood.”[1] Many pundits now believe America’s innovation engine is sputtering and is in need of tune-up. The proof, according to journalists Michelle Jamrisko (@mljamrisko), Alex Tanzi (@atanzi) and Wei Lu, is the fact that, in the latest Bloomberg Innovation Index, “the U.S. dropped out of a top 10 that features a cluster of European countries.”[2] When the Index was first published, in 2013, the U.S. held the top spot. It’s not only the loss of U.S. economic leadership that pundits fear, they also worry about U.S. national security.  A report published by the Council on Foreign Relations (CFR) notes, “Countries that can harness the current wave of innovation, mitigate its potential disruptions, and capitalize on its transformative power will gain economic and military advantages over potential rivals.”[3] China is trying to do just that, while the American innovation engine sputters. One indication of China’s push for innovation is the fact that it has risen from 29th spot in Bloomberg Index in 2014 to the mid-teens in the latest report, although it did slip one spot this year.

Why America needs a tune-up

Caleb Watney (@calebwatney), director of innovation policy at the Progressive Policy Institute, laments that America’s innovation engine is slowing. He writes, “The coronavirus pandemic and the administration’s botched response to it are damaging the engine of American innovation in three major ways: The flow of talented people from overseas is slowing; the university hubs that produce basic research and development are in financial turmoil; and the circulation of people and ideas in high-productivity industrial clusters, such as Silicon Valley, has been impeded.”[4] He goes on to note that the pandemic didn’t cause the America’s innovation to sputter it only added to the sputtering. He explains, “All three trends started before the coronavirus arrived, but the pandemic has accelerated them in ways that, if left unaddressed, could cripple the U.S. economy for decades.”

In some ways, the pandemic ties the hands of the current administration when it comes to immigration policy; nevertheless, it needs to recognize the value immigrants bring to this country. Watney explains, “Over the past century, the U.S. has consistently attracted the world’s most inquiring minds and skilled workers, despite an immigration system that is in no way optimized for that purpose. More than half of American startups that became companies valued at $1 billion or more — a category that includes Google, Tesla, Stripe, and Uber — count immigrants among their founders and top executives. By some estimates, immigrants account for a quarter of U.S. invention and entrepreneurship.” The immigration fix is relatively easy compared to financial crisis facing institutions of higher learning.

Pandemic bailout packages are creating enormous budget shortfalls at the national level at the same time tax revenues are falling. Loss of tax revenue at the state level has also been devastating. These latest revenue woes are a significant blow considering many states are still trying to recover from the Great Recession. Fiscal woes have a significant impact on higher learning and innovation. Watney explains, “Public-university budgets were devastated after the Great Recession depleted state coffers. According to the State Higher Education Executive Officers Association, state support for public universities was still $1,000 less per student in real dollars in 2018 than in 2008. The looming state budget cuts from the coronavirus recession will only make matters worse. … Without further support, American colleges and universities face significant faculty and research budget cuts. The potential for disinvestment is greatest in the science and engineering departments, which rely most heavily on international students. These developments jeopardize the role that universities play in promoting innovation. They not only attract and train talented students; they also produce fundamental research that becomes the basis for future technological progress. They serve as focal points for commercialization through their individual patenting offices, and as collaborators for experimental product development with industry; they also help codify knowledge through journal publications.” Although many companies still do research, universities undertake primary research upon which corporate research efforts often build.

Watney is also concerned that the pandemic has promoted remote work, which, in turn, has resulted in many tech workers leaving areas like Silicon Valley. He writes, “Before the pandemic, housing shortages in the San Francisco Bay Area and other high-demand locations had become a major barrier to innovation and economic growth. Silicon Valley and similar clusters now face a rather different challenge: the sudden spike in remote work. … Large tech companies forced to deal with remote work have discovered that, at least in the short run, it works tolerably well. Rather than deal with continued reopening uncertainty as the virus rages on, companies like Facebook, Twitter, Shopify, and Quora have allowed most or all of their employees to work from home permanently.” You might be asking, “What’s the problem?” Watney explains there is tremendous value in “knowledge-based clusters” that typically sprout up around universities. Within these clusters, he writes, “Engineers, academics, investors, designers, computer scientists, and supply-chain managers mingle across firms, share ideas, have serendipitous run-ins, and push one another in a way that makes the entire group more productive and creative than individuals would be in isolation.”

Watney laments, “In the past half century, America’s innovation engine — built on an influx of global brainpower, a vibrant university system, cities that encourage the spontaneous interaction of people and ideas — has worked so well that policy makers have taken it for granted. Yet the pandemic is now disassembling that engine in remarkably precise ways. … What Americans should not do is expect past economic momentum to carry the U.S. through the present crisis. Just as the coronavirus won’t go away on its own, the sources of economic innovation in the United States won’t just maintain themselves.”

David H. McCormick, CEO of Bridgewater Associates, agrees with Watney that American policymakers need to step up and make some changes. He writes, “We must turn our minds to the long game of national renewal, even as we continue to fight the coronavirus pandemic. … It will not be enough to recover from the disease; we must also address our preexisting conditions. The declining state of innovation in America should sit near the top of the agenda. Scientific and technological leadership has long been a foundation of America’s prosperity and security.”[5] He suggests five things policymakers can do. He writes, “America should adopt a national innovation policy. Recognizing that government intervention risks cronyism and inefficiencies, five principles should guide this national effort: (1) support US companies in sectors with winner-take-all structures or significant first-mover advantages; (2) fund promising, early-stage technological research; (3) support indigenous development in sectors where US competitors highly subsidize their own companies; (4) prioritize technologies or capabilities with significant military or strategic implications; and (5) harness the private sector and market forces.”

The CFR report notes, “The United States has led the world in innovation, research, and technology development since World War II, but that leadership is now at risk. … U.S. leadership in science and technology is at risk because of a decades-long stagnation in federal support and funding for research and development. Private-sector investment has risen, but it is not a substitute for federally funded R&D directed at national economic, strategic, and social concerns.” McCormick agrees with that assessment. He concludes, “Post-pandemic, fiscal belt-tightening may be in order to narrow the deficit and contain debt levels, but lawmakers should recognize that the cost of losing America’s innovative edge far exceeds the investment required to keep it. Recovering from COVID-19 is only the first step. We must also keep our eyes on the horizon and make the investments now to ensure US economic might and national security in the decades ahead.”