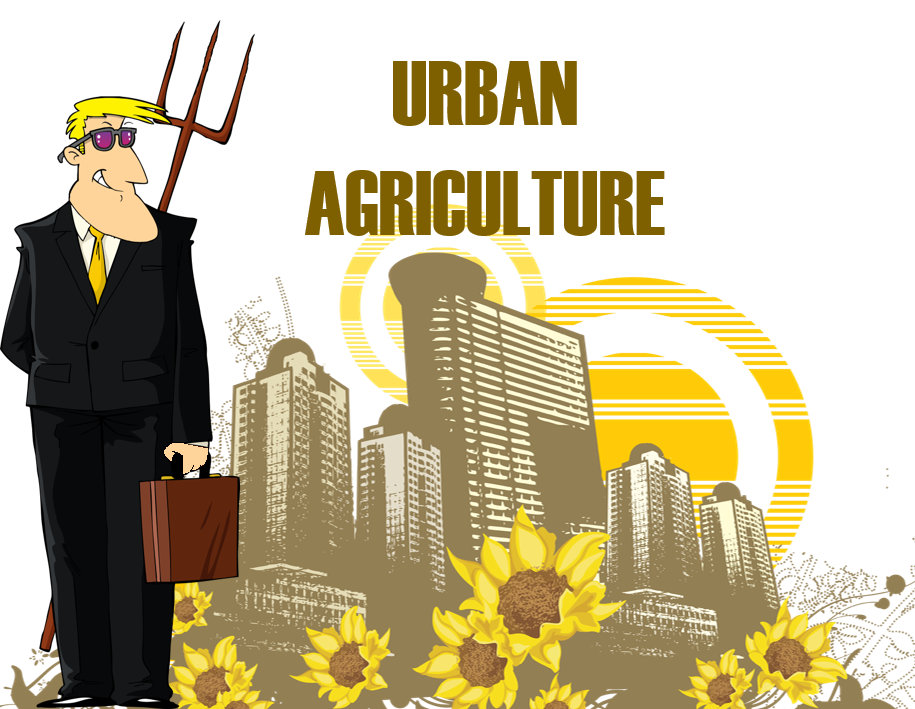 Agriculture in the City

Readers old enough to remember the 1960s, might recall the television show “Green Acres” starring Eddie Albert and Eva Gabor as a couple who move from New York City to a country farm. The theme song for the show was written by Vic Mizzy and it began with the lyrics:

Green acres is the place for me
Farm livin’ is the life for me
Land spreadin’ out so far and wide
Keep Manhattan, just give me that countryside

In the show, Eddie Albert wanted to move to rural America to farm and his wife, Eva Gabor, wanted to stay in the city to enjoy all its amenities. In the years ahead, with the rise of urban agriculture, both dreams could come true. The United States Department of Agriculture (USDA) appears to define city agriculture as a hobby, indicating it “takes the form of backyard, roof-top and balcony gardening, community gardening in vacant lots and parks, roadside urban fringe agriculture.”[1] Wikipedia defines urban agriculture more broadly to include “the practice of cultivating, processing and distributing food in or around urban areas. Urban agriculture can also involve animal husbandry, aquaculture, agroforestry, urban beekeeping, and horticulture.”[2] To be fair, the USDA does offer a downloadable “Urban Farm Business Plan Handbook” and an “Urban Agriculture ToolKit“.

Most people instinctively understand city living is more costly than rural living. Space is at a premium and what space is available can be pricey. Environmental journalist Daphne Ewing-Chow (@daphneewingchow) writes, “Urban farming practices such as rooftop gardens, community greenhouses and vertical farms have provided an alternative to rural agriculture, but given the high cost of urban land, space and size limitations, non-conducive environmental conditions and limited human resources, these methods have not been without their challenges.”[3] So why would anyone in their right mind think about farming in the city? Staff members at Greensgrow note, “Urban farming is clearly in the mind’s eye of many individuals, community groups, food justice advocates, environmentalists, city planners and gardeners. That’s great, but what does it all mean, what is urban agriculture and why all the interest now?”[4] They go to note, “Growing food in cities is not a new concept.” In many peoples’ minds, urban agriculture may be synonymous with gardening; however, groups like Greensgrow are involved in the agriculture business. They explain, “Urban agriculture is often confused with community gardening, homesteading or subsistence farming. We’re happy to be thought of in such fine company but the fact is that they are very different animals. What distinguishes us is that urban agriculture assumes a level of commerce, the growing of product to be sold as opposed to being grown for personal consumption or sharing.”

There are several good reasons people should consider urban agriculture a viable food supply in the years ahead. Food grown close to consumers reduces both transportation costs and food waste. In addition, many urban agriculture concepts involve indoor farming where conditions can be carefully controlled. The Economist notes, “From inside shipping containers in Brooklyn, New York, to a disused air-raid shelter under London’s streets and an innocuous warehouse on a Dubai industrial estate, vertical farms are sprouting up in all sorts of places, nourished by investment in the business from the likes of Japan’s SoftBank and Amazon’s founder, Jeff Bezos. This should cheer anyone who wants organic produce that has been grown without pesticides and other chemicals, and which has not been driven hundreds of miles in refrigerated lorries or flown thousands of miles in the belly of a plane. Such farms can greatly reduce the space needed for cultivation, which is useful in urban areas where land is in short supply and expensive.”[4] Not only does indoor agriculture use resources wisely, it isn’t subject to the vagaries of climate change. Ewing-Chow asserts urban farming techniques could be essential for countries “that struggle with environmental and climate factors that lead to crop loss.”[5]

Growing crops indoors is not a new concept; however, new technologies are being brought to bear to make indoor, urban agriculture more efficient and affordable. For example, Ewing-Chow discusses an Israeli agricultural technology company called Seedo. She writes:

“Vertical farming’s ‘closed and controlled’ approach has been successful in eliminating the risk of insects, pests and diseases that are prevalent in traditional agricultural systems but the infrastructure required has typically been cost-prohibitive and highly reliant on fossil fuels (solar power is typically not enough). Seedo is the world’s first fully-automated and controlled indoor-growing technology for the ‘at-home’ market — the self-driving car of agriculture. Compact commercial containers that resemble small refrigerators utilize AI algorithms to produce optimal water and light conditions — essentially controlling the weather — through a hybrid system of hydroponics and aeroponics.”

Seedo isn’t the only firm advancing indoor, urban agriculture. Adele Peters (@adele_peters) reports another indoor farming company called Plenty is using robot farm workers to “help it optimize growing conditions to make the most delicious produce.”[6] She continues, “Matt Barnard, CEO and cofounder of Plenty, … wants to change how the world eats by changing how food is grown. The new farm, which will begin selling produce to San Franciscans later this year, is the latest iteration of its indoor growing system, designed to grow food as efficiently as possible in any space, so cities anywhere can have access to locally grown vegetables — optimized for flavor — at any time of year.”

Another company in this agriculture space is Freight Farm, which provides farmers the ability to grow vegetables in converted freight shipping containers equipped with the latest hydroponics and automated systems equipment. Kara Carlson (@KaraCarlson2) reports, “Freight Farms started in 2010 with the goal of bringing viable, space-efficient farming techniques to all climates and skill levels year-round.”[7] She goes on to note, “The cars are not cheap. Each container — the kind commonly seen on trains, trucks or ships — costs $85,000, not including shipping. Freight Farms calculates annual profit for each container to be an average of $39,000 annually.” By comparison, Ewing-Chow reports a Seedo system retails for around $2,400.

Peters raises a note of caution. She writes, “Indoor farming still hasn’t proven itself at scale. Aerofarms, another startup with a massive indoor farm at its headquarters in Newark, New Jersey, said in 2015 that it expected to build 25 farms over the next five years; to date, it has built one large farm in addition to its headquarters. FarmedHere said in 2015 that it planned to build 18 farms near major cities. Two years later, the company shut down. Bowery, a New York-based, Alphabet-backed startup that also uses robotics, has two farms so far, though it raised a $90 million round of investment in late 2018 and plans to expand. Plenty itself had planned to open a farm near Seattle by this point, but decided to focus on building its tech platform.” As climate change makes growing conditions more perilous, I suspect the benefits of indoor farming will make it more viable and profitable. In fact, Robbin Laird believes vertical, urban agriculture could become a national security issue.[8] He explains, “Vertical farming is a bold approach that will become a critical national asset — and will require protection. Vertical farming — growing multiple crops in specially designed tall buildings in urban and suburban areas — is taking international farming into the 21st century. As urbanization accelerates in the 21st century and as many of the world’s urban areas are by seas, ensuring the security of these areas — inclusive of provision of basic quality of life, such as food — is a key requirement and challenge.”

Robotics, cognitive technologies, and proven indoor farming techniques are poised to have a significant impact on the agricultural sector in the years ahead. Although vegetable greens have been the primary crops of vertical farms, Peters notes over 700 varieties of crops are being experimented with in the vertical farming arena. Urban-grown crops will likely be more expensive than traditional crops; however, they will also be a more dependable source of food grown close to where the majority of consumers will live. The Economist concludes, “Some field crops, including staples such as rice and wheat, are unlikely ever to be suitable for growing in vast stacks. But as its costs fall thanks to further research, vertical farming will compete more keenly with old-fashioned greenhouses and conventional, horizontal farms where crops grow in the earth. As an extra form of food production, vertical farming deserves to be welcomed, especially by the people whose impulse is to turn their back on the future.”