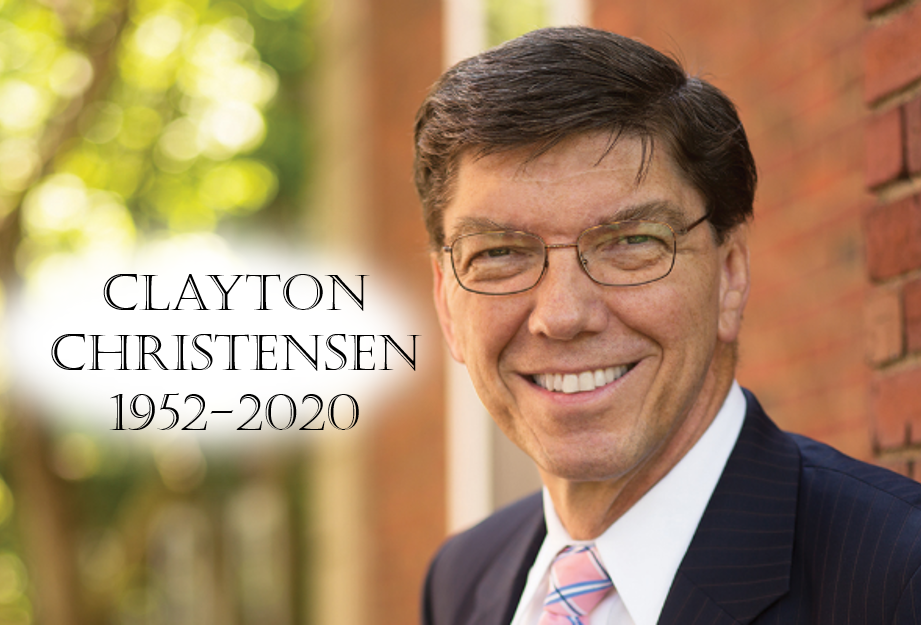 A Brief Look Back at Clayton Christensen’s Innovative Ideas

Anybody who reads a lot about business management and innovation is familiar with Clayton Christensen, the Harvard Business School professor and entrepreneur, who died on 23 January 2020. One of Professor Christensen’s greatest attributes was a curious mind. He once told participants at an Economist conference, “When I die and they’re going to interview me outside of heaven to decide whether…to let me in. I’m going to start by saying ‘I’ve got some questions for you first’.”[1] It was his innate curiosity that led him to ask, “Why do great firms fail?” His search for answers motivated him to write The Innovator’s Dilemma. The Economist notes, “The book, published in 1997, popularized the idea of disruptive innovation. It made the Harvard Business School professor the most influential management thinker of his time. … Unlike most management theories, which live and die like fruit flies, his will outlast him.”[2]

The premise of Christensen’s groundbreaking book was that many companies’ hubris causes them to ignore disruptive innovations that can eventually lead to their downfall. Ten years after The Innovator’s Dilemma was published, Jena Mcgregor (@jenamcgregor), wondered whether the book and its ideas really had staying power.[2] Robert Sutton (@work_matters), professor of management science at Stanford University, told her Christensen’s ideas remained very relevant. “There are very few books, whether you do innovation in the academic world or in the business world, that you have to understand equally well,” he told her. “You have to know it.” Roger Martin, the former dean of the Joseph L. Rotman School of Management at the University of Toronto, told Mcgregor, “One reason the first book was so well-received is that Christensen doesn’t criticize managers, as many ivory tower professors do in their books. Rather, a major theme is that great managers miss disruptive innovations precisely because they’re focused on their customers, working hard to create returns for shareholders, and trying to do everything right.” Unfortunately, this myopic focus on customers allows them to be blindsided. In an interview Mcgregor conducted with Christensen, he told her, “The cursory reading is ‘don’t listen [to your customers]’ The deep reading is you have to be careful which customers you listen to, and then you need to watch what they do, not listen to what they say.”

Mcgregor noted, “Criticisms of the book tend to surround its lack of solutions, which Christensen tried to correct in his follow-up, The Innovator’s Solution, which was published in 2003 to less fanfare.” One of Christensen’s last books was entitled Competing Against Luck: The Story of Innovation and Customer Choice, coauthored by Karen Dillon (@KarDillon), Taddy Hall (@taddyhall), and David S. Duncan. In the book, they discuss the Theory of Jobs to Be Done. According the book’s introduction, that theory helps companies understand their “customers’ struggle for progress and then [creates] the right solution and attendant set of experiences to ensure [they] solve [their] customers’ jobs well, every time.” They add, “This is a book about progress. Yes, it’s a book about innovation — and how to get better at it. But at is core, this book is about the struggles we all face to make progress in our lives.” Christensen and his colleagues wrote:

Although it may sound like Christensen and his colleagues were skeptical about the value of big data analytics, I don’t believe that’s their message. What I think they were saying is that companies have been asking their analytics to answer the wrong questions. Although Christensen did say, one of his first questions to St. Peter would be: “Why did you only make data available about the past?”[3] Denise Lee Yohn (@deniseleeyohn), a brand leadership expert, writes, “The ‘jobs to be done’ theory of innovation presents an approach to how companies introduce successful new products and services that remains as counter-intuitive — and relevant — today as it was when Christensen first shared the idea back in 2005.”[4] Concerning the ‘jobs to be done’ theory, Dan Bigman and Wayne Cooper, wrote, “His solution is simple, profound and right in front of your face: See big problems as big opportunities. Look for the intersection of non-consumption and what he calls ‘jobs that must be done.’ Then create products — and processes — that serve those needs. By doing so, you’ll harness what he terms ‘market-creating innovation’ — by far the most profitable, disruptive force in business (think electric light, iPhones and the Model T). Bonus: You’ll help a lot of people, too.”[5] In an interview, Christensen told them:

“I’m coming at you from an academic perspective, which has its limits, but if I were a CEO, I’d take my board somewhere on an island in the Great Salt Lake or something once a year and talk about these principles and report to them on where each of these are: ‘Where’s disruption happening?’; ‘We need to grow, how are we gonna do it at that level?’ precisely because of the ossification. You think, ‘We’ve got to get these returns,’ and then you think, ‘We have to do it in this way.’ And when you say, ‘It has to be done in this way,’ then you’re dead. So I’d figure out a way to get people together, teach them the models, not one model but multiple models, just what’s the job to be done? Come to that every year to be sure that we’re organized in the right way.“

A year before Christensen’s death, Bigman and Cooper wrote, “Know it or not, like it or not, no single business thinker of the past 50 years has had as much impact on the day-to-day way you run your business than Clayton Christensen.”[4] The Economist concludes, “He was wary of accepted measures of success, such as fame. Life, he insisted, should be judged by the impact it has on individuals; at its best management could be ‘the most noble of professions’, but only if it assisted others in learning and growing. And he preferred not to give answers, but to help people work things out for themselves.” His curious mind and profound insights will be missed.