As part of our economic development trip to Iraq where we are beginning to lay the ground work and templates for Development-in-a-Box™, our team for the last 3 days has driven the northern part of Iraq from the Syrian and Turkish border in western Iraq to the Iranian border in the eastern part of the country. It was a fascinating tour of an especially beautiful part of the country (I hope to post some pictures when I get a faster connection) where commerce is flourishing and the people are eager to build a strong and vibrant economic future for themselves.

Iraq’s neighbors are wary of the success its Kurd population is experiencing. They fear it will stir transnational fervor for a greater and independent Kurdistan — something both Iran and Turkey strongly oppose. As I mentioned in a previous post, however, the economic success of Iraqi Kurdistan is important for the entire region, not just those who live there. Iraqi Kurds have successfully established a democratic government, they reconnected to the international community, they welcome visitors, and they allow persons of all faiths to worship peacefully. Let me tell you a little about my travels. 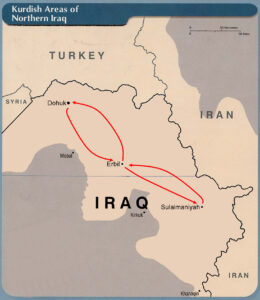 We started the tour by driving from Erbil (where we are staying) to the city of Dohuk. Dohuk is the capital of the Dohuk Governate. It has about 500,000 inhabitants, mostly consisting of Kurds and Assyrians. According to some sources, the name “Dohuk” comes from Kurmanji Kurdish, which means “small village.” Dohuk is the heart of the Badinan population of the Kurds. Circled by mountains along the Tigris River, Dohuk has a growing tourist industry. Dohuk’s population has grown steadily since the 1990s as the rural population moved to the cities, for both jobs and security. The University of Dohuk, founded in 1992, is a growing center for teaching and research in Dohuk.

In Dohuk, we met a family that is building a conglomerate of companies in the construction, concrete manufacturing, soda, juice and water bottling, steel fabrication, automobile, chocolate manufacturing, and banking sectors. As eclectic as that group of companies sounds, I’m sure they are investing in other companies that I probably do not know about.

More to come later, including details of my trip to Sulaimaniyah. Sulaimaniyah lies in a narrow valley where the ancient Kurdish country of Sharazur was located. The city was founded in 1784 by a Kurdish prince named as Ibrahim Pasha Baban. He named the city after his father Sulaiman Pasha (Sulaiman is the Islamic version of the name Solomon). Since being founded as the capital of a powerful Kurdish principality, it has grown to about 800,000 people. It is the cultural center of the Sorani-speaking Kurds and an important economic center for Iraqi Kurdistan.

My military escort asked me to go with him so I have to stop. This is how it goes in a war zone.

There has been plenty of bad supply chain news over the past year. At the beginning of the pandemic, some analysts believed the global supply