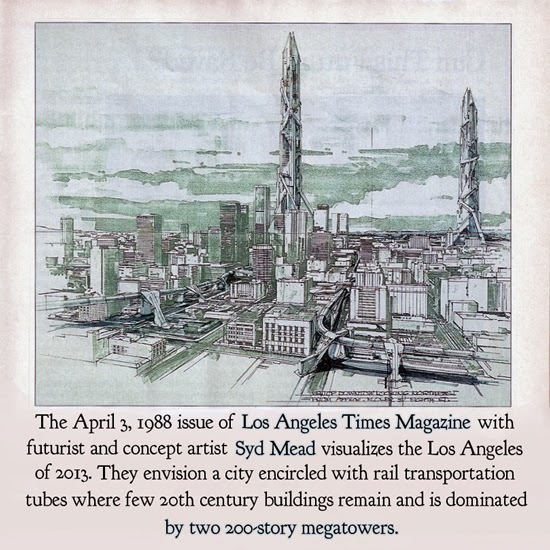 Predicting what cities of the future would look like has been a source of speculation for centuries. Isaac Asimov, the brilliant science fiction writer and renaissance man, once predicted that by 2014 we would see the development of deep sea cities and underwater supply chains to serve them. Fifty years ago the Reader’s Digest predicted that by now we would all be using rocket belts, hovercraft, moving sidewalks, and monorails and that large portions of major cities would be domed and climate-controlled. Forty years ago David Rorvik predicted, “By the mid 1980s, automated autos, noiseless pneumatic subways and luxury-liner hovercraft will have radically restructured surface mobility.” A quarter of century ago the Los Angeles Times Magazine predicted that by 2013 the City of Angels would be encircled with rail transportation tubes and almost all 20th century buildings replaced by more modern buildings. There are still people predicting that high-speed “vacutrains” are coming (see my article “Predictions 2015: Transportation and Logistics“) and we know that driverless cars are on the way; but, the only portions of cities that have been domes are sports stadiums. If history has taught us anything, those lessons include that established cities change slowly and that we’re really not very good at predicting how they will change over time.

Most past urban prognosticators have concentrated on how transportation systems would change; but, very few ever imagined that it would be communication systems that would change the most drastically. The Internet and mobile technologies are what have laid the foundation for the smart city of the future. As I have noted in past articles, cities consist of a number of networks, including: Energy; Water; Waste; Infrastructure; Public Safety; Education; Healthcare; Transportation; and Citizen Services. Each of these networks can benefit from broadband connectivity. “No industry or household in the world will reach their future potential without access to broadband,” write Adie Tomer (@AdieTomer) and Rob Puentes (@rpuentes), “it is the electricity of the 21st century.”[1] Electricity remains the sine qua non of development but Internet connectivity is also becoming essential because it can improve every network including electricity grids. In fact, many analysts predict that these networks will not remain siloed but become part of the Internet of Things (IoT). Many of the predictions that have been made about the future of smart cities begin with predictions about smart grids.

Christine Hertzog (@SmartGridLib), founder and Managing Director of the Smart Grid Library, writes, “How much can change in a year? When it comes to Smart Grid and Smart City topics, the answer is quite simply — a lot can change.”[2] She predicts, “The surge in privately-owned deployments [of solar panels] occurs as innovative business services reduce expensive friction in planning, financing, and sourcing solar installations. These distributed generation (DG) deployments obviate the need for expensive transmission grid investments and focus utility money on the historically underinvested low voltage grid. The Smart Grid’s bi-directional flow of electricity takes a big leap forward.” Although there are opportunities for some urban home owners to install solar panels, residents in high rises and apartment complexes don’t have that luxury. Urban businesses and building owners, on the other hand, can contribute to bi-directional flow of electricity by installing the right kinds of systems. This leads to another of Hertzog’s predictions. “Governmental, commercial and residential interests build microgrids that are capable of delivering a limited degree of building self-sufficiency in energy. ‘Graceful degradation’ becomes the new buzzword phrase.”

Smart networks (connected to the IoT) will allow governments and businesses providing services to monitor network performance, detect pending or actual failures, and help mitigate the effects of spikes that cause problems regardless of the type of network that is connected. Dylan Roberts, Leeds City Council CIO, discusses how smart technologies can help cities in the United Kingdom, but his points are applicable to all cities. “In terms of the big challenges we’ve got as a country, especially in the public sector in these times of austerity,” he states, “I think smart cities provide one of the answers to enable us to do a lot more for less. It’s not about the technology — although you have to have a very good technology foundation and what I’d call a digital city foundation — but that’s the foundation to a smart city.”[3]

Four years ago Michael Durham stepped way out on the limb and made his predictions about what a smart city might look like in the year 2050.[4] Anybody that brave (or foolish) deserves a second look. Here are some of things that Durham predicted:

“In 40 years’ time cities will not just be smart, they will be so brainy it hurts. We will all be working mostly from home using super-fast data terminals that relay both information and entertainment, while electric cars will transport us to shops where we will pay for goods and services with a wave of our mobile phone. Our smart homes will be environmentally friendly hubs for both work and play, where recycling units instantly convert our rubbish to compost and make waste water drinkable again. Domestic computers will automatically order our shopping and suggest books and films for our enjoyment on massive wall screens. We will be fully wired into the national digital grid, sharing our daily domestic data with public authorities, allowing us to access their health, transport and education services, while we provide them with details of our energy use and consumer needs. … Nobody has to put up with a dreary, unproductive nine-to-five job just for the pay. Work is by definition creative, knowledge-based, intellectual, stimulating and fun. The latest versions of massive bandwidth internet using super-efficient cabling ensures that information of all types can be accessed immediately and interchanged instantly. Most dirty jobs are done automatically by machines. … Some of this we can predict with reasonable certainty, based on the technological advances we see all around us. But some of it must remain speculative.”

Although Durham is envisioning a smart UK city (where a national digital grid will be easier to build than in a country as large as the U.S.), many of things he predicts will probably come to fruition (e.g., ubiquitous mobile payments, electric cars, and what we now call the Internet of Things). Some of the other predictions (e.g., systems that connect to health and education services) depend on how the debates about privacy and security unfold in the coming years. Simon Segars (@simonsegars), CEO of ARM, states, “Privacy and security two very important areas which need to be address. It’s crucial that consumers own their own data. And it’s important to note that all data is not equal; there will have to be different privacy constraints on different types of data. We’re only really scratching the surface of what IoT can become. There are massive benefits for businesses and society at large. These technology solutions aren’t difficult and there’s a lot of savings to be had. The opportunity is there to do and I think the need will become more acute over time.”[5] The biggest concern raised by Durham is his point about jobs and automation. His tone is lighthearted and upbeat about work; but, many analysts predict that finding work in urban environments is going to be one of the great challenges over the next forty years.