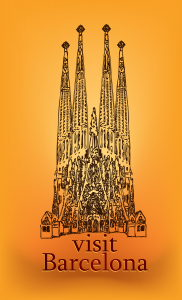 Travel writers love painting a picture of the world they see with words; and, Barcelona, Spain, has a lot to write about. Reporters for the Lonely Planet paint this picture of the city: “The deep blue Mediterranean beckons. Sun-drenched beaches make a fine backdrop to a jog, bike ride or long leisurely stroll along the seaside — followed by a refreshing dip. You can also enjoy the view from out on the water while kayaking, stand-up paddleboarding or taking it easy on a sunset cruise. Looming behind the city, the rolling forest-covered Collserola Hills provide a scenic setting for hiking, mountain biking or just admiring the view. Closer to the city center, hilltop Montjuïc offers endless exploring amid botanic and sculpture gardens, an old castle and first-rate museums with panoramic views at every turn.” A couple of years ago, Vivienne Walt (@vivwalt), a roving correspondent for several publications, was taken on stroll of the city by Juan Blanco, Cisco’s business development director for southern Europe. During that stroll, he stopped and asked Walt to look around. She reports seeing the city’s “twisting alleyways and sidewalk cafés spilling over with people” and the city’s “cobblestone square where the centuries-old El Born market hall stands.” Blanco then asked her, “Notice anything unusual here?”[1] She eventually noticed “curved plastic shields affixed to the lampposts at a height of about 30 feet.” Those plastic shields protected “fine-tuned computer systems, capable of measuring noise, traffic, pollution, crowds, even the number of selfies posted from the street. They are the future of Barcelona, and in some sense they are the future for all of us too.”

“If you want a glimpse of the very near future,” Walt writes, “one good place to start is this graceful, breezy seaside city of about 2 million people. In times past, Barcelona was famous for its revolutionary artists, like the painter Joan Miró and the architect Antoni Gaudí. But [lately] it has carved out a role in a revolution of a different kind: creating a blueprint for the city of the 21st century at a moment when urban dwelling is ever more predominant. According to the UN, about 84% of people will live in cities by the end of the century.” Steve Alexander, Ciena’s Senior Vice President and Chief Technology Officer, explains Barcelona is one of only a handful of cities that can honestly lay claim to being a smart city. “With all the hype around smart cities today,” he writes, “you would think they are ubiquitous. Even though there are a few high-profile examples, smart cities aren’t yet as widespread as you might think.”[2] He adds, “While progress has certainly been made — one only has to look at what Barcelona has achieved since the ‘smart city’ ideal was first envisioned — it’s clear there’s still a lot of work to do to get this right the first time.”

Barcelona’s journey to its smart city status only began half a dozen years ago. Laura Adler, a PhD candidate in Sociology at Harvard, reports, “Xavier Trias, Mayor of Barcelona from 2011 to 2015, ran on a platform of technological innovation in city services. Upon taking office, he formed a new team, Smart City Barcelona, tasked with integrating existing projects and identifying new opportunities to enhance services for all of the city’s people and businesses. Smart City Barcelona identified 12 areas for intervention, including transportation, water, energy, waste, and open government, and initiated 22 programs, encompassing 83 distinct projects across urban systems.”[3] Trias was fortunate because his predecessors had enough foresight to wire the city with fiber optic cable in preparation for the 1992 Olympics. This fiber optic grid provides the central nervous system for Barcelona’s Internet of Things (IoT). Adler explains, “In launching its IoT program, Barcelona had a solid foundation: the projects took advantage of 500 kilometers of fiber optic cable within the city. This extensive network was initiated 30 years ago when the city connected two municipal buildings with early fiber technology. The fiber network now provides 90 percent fiber-to-the-home coverage and serves as a backbone for integrated city systems.”

How important is an IoT backbone for any city wanting to become smarter? Shrikant Shenwai, CEO of the WBA, notes, “Connectivity is now an essential commodity, much in the same category as power and water. Yet many people in some of the world’s major cities are still without an internet connection. Wi-Fi is playing an instrumental role in helping cities bring wider and more affordable connectivity to its citizens. The issue of the urban unconnected is of critical importance the economies and societies around the world.”[4] Shenwai’s remarks echo those of Brookings’ analysts, Adie Tomer (@AdieTomer) and Rob Puentes (@rpuentes), who bluntly state, “No industry or household in the world, will reach their future potential without access to broadband, it is the electricity of the 21st century.”[5]

Walt reports, “Like most cities, Barcelona had added services haphazardly over the decades.” That haphazardness has now become more organized. Systems historically running in isolation are now coordinated. The man who made it all happen was Vicente Guillart, director of the Institution for Advanced Architecture of Catalonia. He told Walt, “Before, the city was organized like silos. Lighting didn’t talk to traffic didn’t talk to water. Each had its own budget with its own data and its own cameras.” Although the city is not yet fully integrated, Walt reports great progress has been made. “The solution,” Walt reports, “was to knit the services into one system under a single company — the Spanish tower operator Cellnex Telecom won the bid — to run the network and sell spare capacity, generating revenues for the city.” In parts of the city where integration is taking place, “sensors measure how full trash containers are, allowing garbage trucks to empty them only once they’re filled. Parking-space sensors tell drivers, via a phone app, which are vacant, so they avoid circling around. Barcelona reworked its bus routes into an efficient grid rather than the confusing tangle that existed before, increasing ridership 30% in four years. Electronic bus stops now show schedules and local sights, and could soon have ads tailored to the neighborhood.”

As for the sensors on lamp posts discussed earlier, “each has its own IP address, turning it into a telecommunications tower, with the capability to monitor crowds, noise, weather, and traffic from a Wi-Fi router on top. Now if a crowd of drunken tourists wakes up El Born neighborhood at 2 a.m. (a frequent gripe), there is no need to call the cops: They already know the precise decibel level.” Walt reports, “Once in place, all this technology is astonishingly simple to manage.” Artificial intelligence can be leveraged to ensure monitored systems are optimized. IBM believes that cities are based on six core systems that should be optimized both individually and holistically. Those “systems” are: people; business; transport; communication; water; and energy. I would add a seventh system — waste management (which would include both trash and sanitation). Although systems, such as, transportation and water systems, can be made more efficient using siloed data, the real benefits of making cities smart using big data analytics will come when data can be integrated to discover new relationships between systems. What doesn’t work in most cities, Alexander notes, are “siloed, proprietary networks being deployed by various agencies and enterprises which are both often costly and don’t allow for sharing data among one another.” Barcelona may be famous for its history, its beauty, and its football club, but it should also be recognized for its smart city initiatives.